Spooked in the Alton City Cemetery

There aren’t many things spookier than being in a cemetery, at night, by yourself.  Been there, done that… 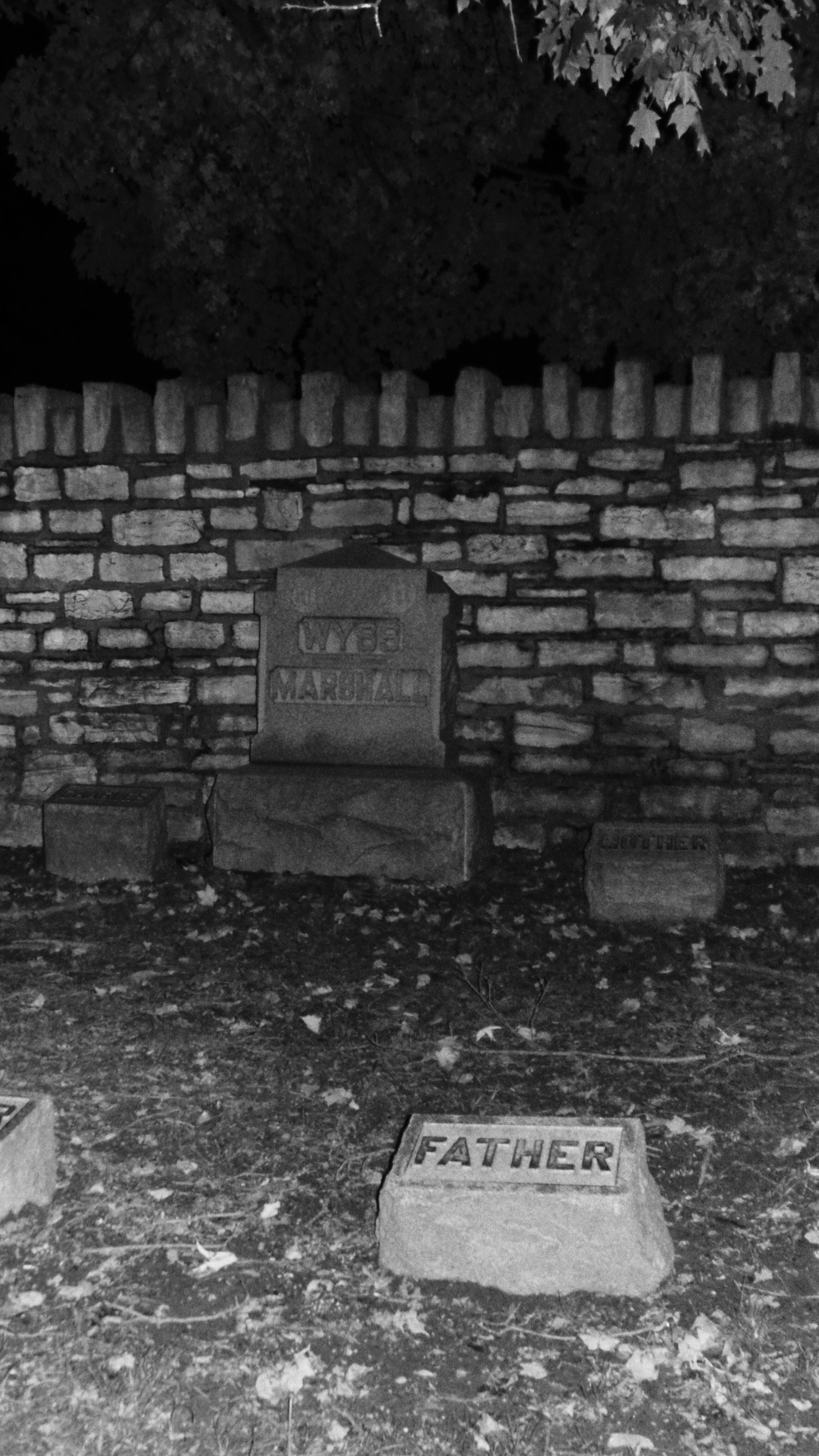 The Alton City Cemetery was the second stop on our Alton Haunted Odyssey Tour.  The trolley parked in front of the well-lit  Elijah Lovejoy monument, which I mentioned in one of my earlier posts.  So far, so good. 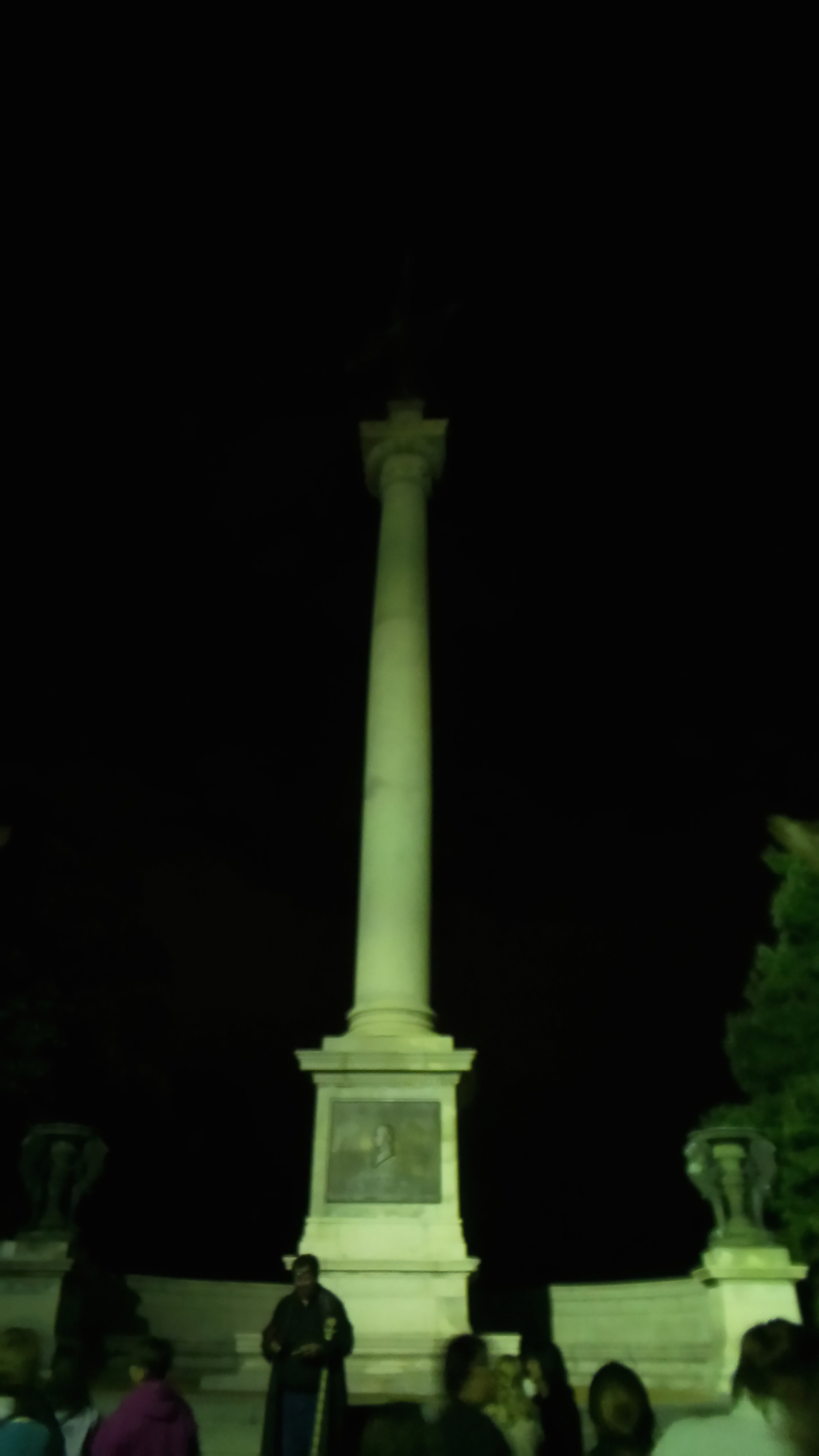 Not sure why all my photos have a weird green tint, but I feel it adds a creepy effect.   No, it’s not an Instagram filter.

The base of the monument is surrounded by The Whispering Wall.  Of course that sounds spooky, but what does it mean?  Basically, two people can sit on opposite ends of the wall, whisper to each other, and be heard perfectly clear. I had to try it.
Here was the first time I got left behind by the rest of the group. But they didn’t go too far, just into the darkness of the cemetery, no big deal…right? 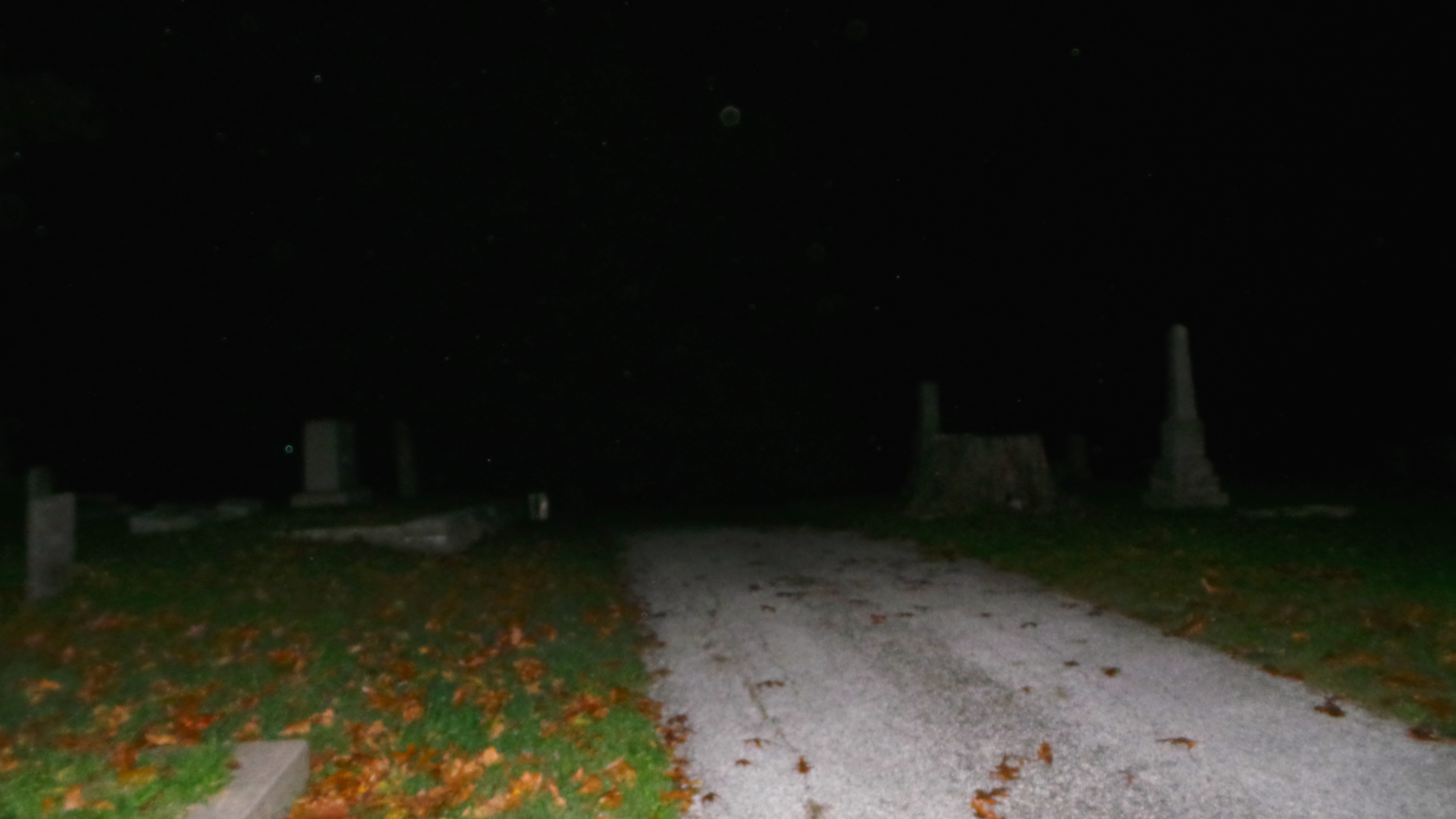 It was completely black; why aren’t there any lights in a cemetery? No one wants to wake the dead, I guess (haha…).
Having caught up with the group (it was pretty easy at a brisk walk), I still wanted pictures, and wanted to capture a shadow, an orb, or just a creepy tombstone photo.  Mission accomplished. 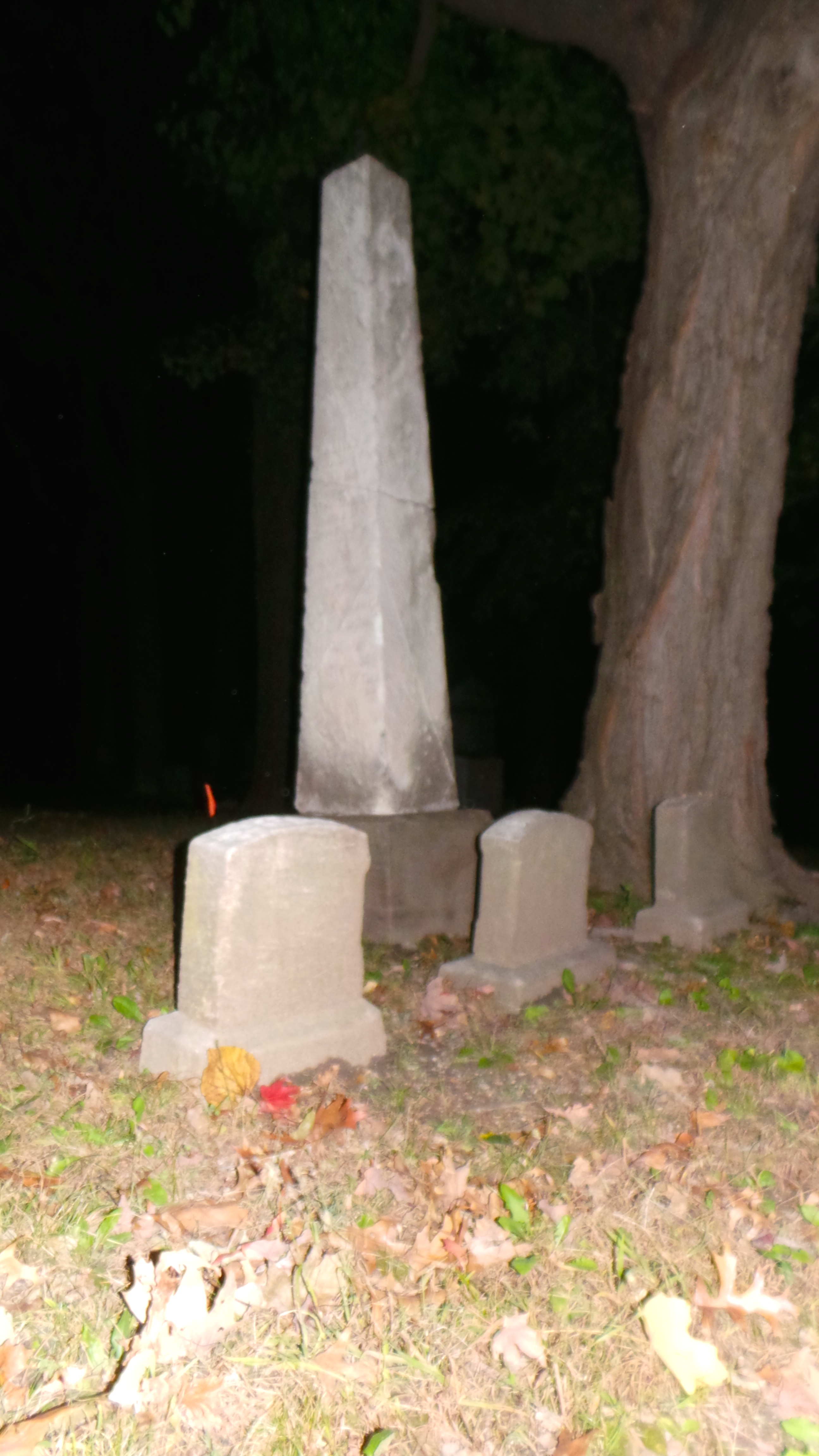 Oh, got a good photo that time. Let me take some more. Oops, where is the rest of the group.
Again, I had to catch up with the group as our ghost guide was pointing out an abandoned mausoleum. He stepped towards it and said, “You can go in there.” I honestly thought for a second he was going to lead us into complete darkness, into the scary crypt.  Then he backed up and said, “homeless people sometimes sleep in there, so it’s probably better to go in during the day.”  Yep, the mausoleum was just put back onto my “day-time” bucket list.

We all began to walk forward again, until I found a great picture spot. Picture perfect moments in a cemetery, that sounds horrible. The group continued to walk, as I continued to take pictures.
Pretty soon I looked back and realized the group left me, for third time. Classic me. I couldn’t see anything. I kept imagining I was spotting shadows or flashing lights in the distance. Were those ghosts or homeless people? I was hoping for ghosts, to be completely honest. 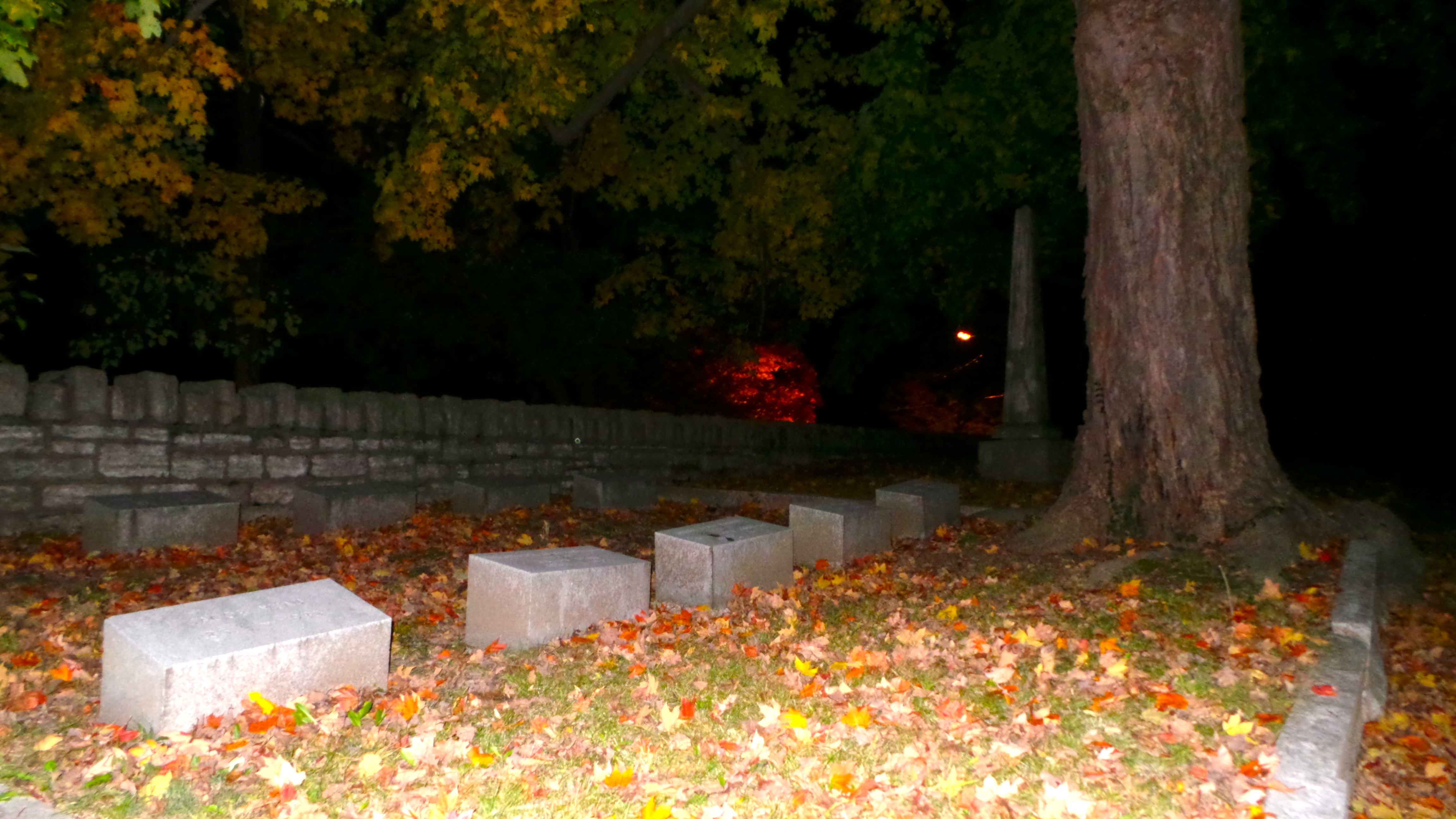 My adrenaline was pumping. I had never been in a cemetery in the middle of the night, let alone lost in one.  I passed by a larger mausoleum, much larger. I stepped a little closer, trying to sneak a peek inside, but spooked myself and hurried back to the dirt path.  Pretty soon my eyes caught the bright light of the Elijah Lovejoy monument.  I then knew the direction to go to meet up with the rest of the group, or at least make it back to the trolley. 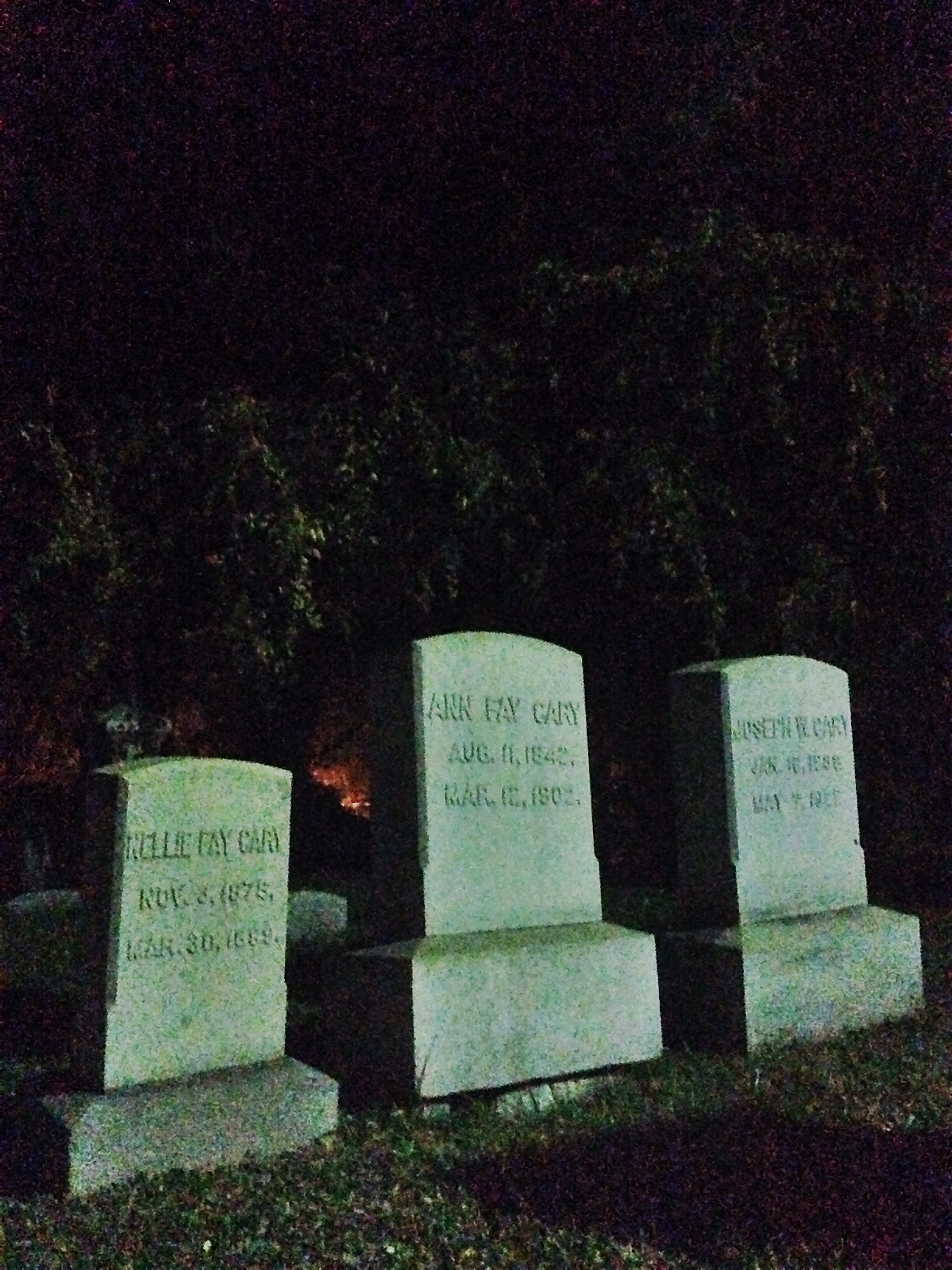 I eventually made my way back, safe and sound.  However, it was a sleepless night.
Being from Orlando, Florida, I have had my fair share of thrills; with Universal, Disney and SeaWorld just minutes from my house. But I have to say, the haunted ghost tours in Alton, Illinois may just top my list of most thrilling adventures.  It was experience I will remember forever.